The straight-sided, round cornered, flat brimmed original Boss of the Plains design dominated for about twenty years. Most 19th-century photographs that show the hat don’t show an intentional crease at all. Most hats were kept open crown. However, through use, abuse, and customization by individual wearers, hats were modified from their original appearance. In particular, the crown would become dented, at first inadvertently, then by deliberate choice of individual owners. 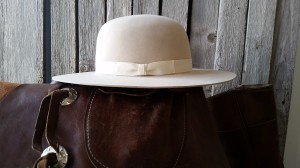 View all posts by stakerhats →